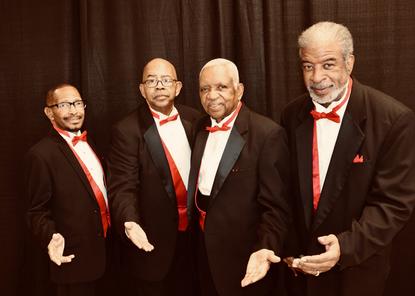 One of the first African American vocal groups to gain acceptance in the white community, the original Ink Spots defined the musical genre that created rhythm & blues, doo-wap and rock and roll.

If I Didn′t Care, their first hit record, was released by Decca in 1939. Many of their recordings topped the early U. S. pop charts, including The Gypsy, which was #1 for 13 weeks.

Over the years, the members of the original Ink Spots changed due to the draft, illness, death and, unfortunately, business, and personal disputes. However, their contribution to American music and pop culture has lived on with the soundtracks of such box office hits as The Aviator, Radio Days and The Shawshank Redemption. TV's The Muppet Show and The Simpsons have featured their hit song, I Don't Want To Set The World On Fire.

Today, direct from Las Vegas, “Coco” is keeping the music and memories alive with The World Famous Ink Spots. From showrooms on The Las Vegas Strip to casinos, festivals and theatres worldwide, the music of one of America’s most popular vocal groups ever continues to attract old and new fans alike. Their performances feature not only the legendary hits of the original Ink Spots, but also legendary rock & roll classics.

The faces and the names may have changed, but the music and the memories remain thanks to the World Famous Ink Spots.