And while she is looking for Mr. Okay, April Brucker has stumbled another disaster — she is reporting on the campaign of presidential hopeful Donald J. Tramp. 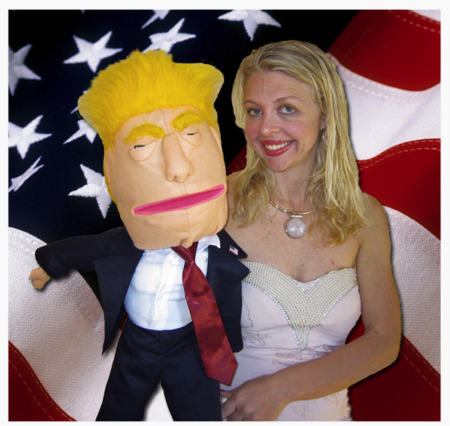 Her campaign coverage Is taking her on the road with this controversial sensation who’s outrageous comments are shaking up the Internet. Donald J. Tramp is certainly not Mr. Right, and definitely not even Mr. Okay.

The petite Monroe-esque comedienne is certainly deserving of Mr. Right. A graduate of the New York University Tisch School of the Arts, April is a Manhattan-based film & television actress, published author and accomplished comedienne.

But her collection of potential Mr. Right’s has included Mr. Convict, who made her a license plate for Valentine’s Day; Mr. Fugitive, who called her before almost dying in a police shootout; and Mr. Sexually Unsure, who always borrowed her lipstick. And of course, there was Mr. Married, Mr. Institutionalized and Mr. No Job and No Place To Live. She even dated Mr. I Was Abducted By Aliens and Mr. Sometimes Turns Into a Werewolf.

April thought she had finally found Mr. Right and became engaged after just three dates with the man of her dreams. However, her fiancé became increasingly jealous of her 16 ventriloquist puppets that she uses in her one-woman touring show. In less than a year, he gave her an ultimatum: “It’s either me or your puppets!”

The legendary British tabloid “The Daily Mail” ignited a firestorm of press coverage for April Brucker with a feature story headlined, “Ventriloquist who splashes out $20,000 a year on her 16 PUPPETS that even have their own bedroom dumps her fiancé after he tells her, ‘It’s them or me!’”

The story spread internationally to dozens of foreign newspapers and magazines, plus went viral on the Web. And then came obsessed suitors from all over the world. Now her dating resume includes stalkers, ex-cons and of course restraining orders. Police sirens often accompany April when she is breaking up with an obsessed suitor.

April isn’t asking for the moon. She doesn’t want a doctor, lawyer, or Native American chieftain. Nope, those are pipe dreams her mother told her to abandon long ago: “Sweetie, just remember people don’t want to break up with you.”

April Brucker just wants a dude who can put up with 16 puppet children, a closet full of costumes, boxes of books and comics and her love for non-fiction history documentaries and pretzels. If you can deal with those things, you are Mr. Okay and maybe your one arrest and partial lobotomy just may be okay, too.

However, desperately seeking Mr. Okay has given April a wealth of material for her stand-up performances at comedy clubs nationwide, plus has resulted in numerous television appearances, including “Cash Cab,” “CBS Sports Now,” “Entertainment Tonight,” “Inside Edition,” “Last Comic Standing,” “Layover With Anthony Bourdain,” “My Strange Addiction,” “No Reservations,” Rachael Ray” and “The Today Show.”

Internationally, April also has appeared on BBC, Telemundo, MTV Europe and Dutch National Television, plus has received news coverage throughout Europe, Asia, Africa, Latin America, Canada, and Australia. (Yes, every place but America, but she’s working on that!)

Her one-woman show “Broke and Semi-Famous,” which she performed at New York’s famed Metropolitan Room, is available on DVD, plus was broadcast on Love TV, a Finnish television network. Her film credits include “The Break Up” (Project Greenlight Greenie Award Nominee), “The Lottery,” “Lullaby” and “Death of a Dummy.”

April and her signature puppet May Wilson are featured in the recently published “Spaz Comics,” the first-ever comic book by comics, which she co-authored. Her book, “I Came, I Saw, I Sang: Memoirs of a Singing Telegram Delivery Girl” (Infinity Publishing, August 31, 2012, ISBN 978-0741477934), is available worldwide from online retailers and bookstores.

Now her on the road reports with Donald J. Tramp are hitting the Internet at full speed. April says, “I hope this isn’t the kind of work that gets my SAG-AFTRA card revoked.”

“I certainly haven’t found Mr. Okay on the campaign trail, but Mr. Okay is out there… isn’t he?”