"Caveman is a blockbuster."

“DEFENDING THE CAVEMAN is so perceptive, so witty, so sweetly understanding, you can’t help feeling exhilarated!”
The Boston Globe

“The hilarity of CAVEMAN – and it IS hilarious – comes from keenly observed detail, from truth. CAVEMAN makes us howl at ourselves, whether we’re male or female.”
The Miami Herald

"Outrageously funny and surprisingly sweet exploration of the gender gap."

“Outrageously funny! CAVEMAN explores all of the things that make men and women fight, laugh and love.” 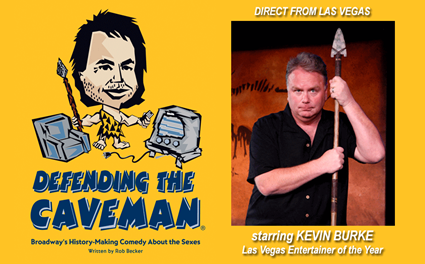 Now available for casino engagements nationwide, Defending The Caveman starring Kevin Burke is a hilariously insightful show about the ways men and women relate with both sexes roaring with laughter and recognition. Defending the Caveman makes us laugh at ourselves about all the ways men and women fight, laugh and love.
Seen in 45 countries and translated into 18 different languages (and counting), Caveman originally opened in San Francisco in 1991 and soon moved to Dallas. Caveman went on to sold-out engagements in Washington DC, Philadelphia and Chicago, before opening on Broadway in 1995.
After running two and a half years, playing 702 performances at the Helen Hayes Theater, Caveman entered the record books as the longest running solo play in Broadway history.

Kevin Burke, Las Vegas Entertainer of the Year, has been starring in Defending the Caveman since 2003. As the star of the Vegas production, Kevin has performed Caveman more than 3,000 times, making Caveman the longest-running Broadway show in Las Vegas history. During that time, Kevin also set the Guinness
World Record for “Most Theatrical Performances in 50 Days.”